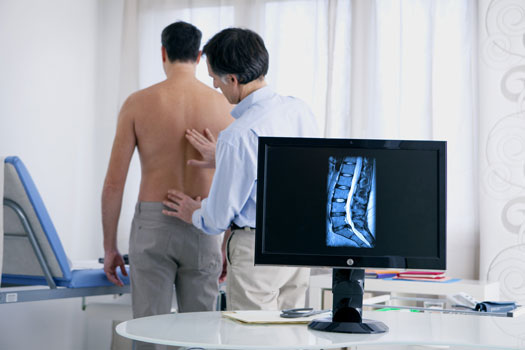 For many decades now, one of the more common ways to deal with a herniated or ruptured spinal disc has been a discectomy. According to an analysis of more than 39,000 patients who've had this procedure, surgery to remove part or all of a damaged spinal disc has a high success rate of 84 percent. Even so, one of the fairly common issues for patients who've had a lumbar discectomy is disc reherniation. We take a closer look at possible causes for this below.

According to the National Library of Medicine, disc reherniation refers to disc herniation that occurs at the same spine level after a patient has been free of symptoms for a certain amount of time after having surgery. This time frame can vary from patient to patient, but it typically occurs within the first three months. Approximately 90 percent of people get better without surgery, but a reherniation requiring surgery continues to be a risk. If only part of the disc was removed, reherniation may involve the remaining part of the disc. When the disc reherniates, portions of the disc may rupture into the spinal canal and irritate nearby nerves. In some cases, a surgeon may choose to remove a more significant portion of the disc than the first herniation.

Here is a video explaining what to expect from a discectomy:

Another potential reason for disc reherniation is a lack of sufficient activity after the procedure. While some initial rest can be beneficial immediately after a discectomy, prolonged inactivity isn't good for the spine and its discs. If spine-supporting muscles become weaker, more of the pressure from daily movements is placed directly onto the backbone and its discs.

Carrying around extra weight places added stress on the same part of the spine where you had your initial herniated disc. A 2016 study referenced by the National Institutes of Health involving more than 200 patients of varying weight ranges found those with a higher body mass index had a significantly greater risk of needing surgery to address reherniation within two years.

Surprisingly, there are some studies suggesting younger patients may be more likely to have issues with reherniation than older ones. Part of the reason for this may be that younger individuals are more likely to return to more demanding activities too soon. They also have more healthy, flexible disc material left, making it easier to reherniate. That said, being older can present some reherniation risks as well, since aging spinal discs are more susceptible to wear or degeneration.

Multiple studies suggest regularly using tobacco products can affect various parts of the spine, including the discs. Smoking has also been associated with reduced circulation, which affects how well the body heals after back surgery. The result is a higher risk of disc reherniation.

If chronic health conditions aren't well managed, you may be more likely to have issues with disc reherniation. For instance, a study published in the Hong Kong Medical Journal found the recurrence rate of disc herniation was twice as high for patients with diabetes.

There are some things you can do to reduce your risk of having a return of your discomfort related to a herniated disc. Start with paying attention to any instructions provided by your doctor, surgeon, or physical therapist. You could also minimize the possibility of disc reherniation by:

Another major cause of reherniations is having a large hole in the outer ring of the disc. Fortunately, this issue is now addressed with Barricaid, an FDA-approved device that closes the holes that are often left in spinal discs after discectomies. With close to 10,000 patients implanted, Barricaid boasts an 81 percent improvement over discectomy alone. Studies cited in more than 65 peer-reviewed publications show Barricaid results in a significant reduction in reherniations, reoperations, and readmissions.

Patients and physicians who have any questions about the Barricaid treatment or how to get access to Barricaid should call us at 844-288-7474.