Is It Possible for a Spinal Disc to Herniate Twice? 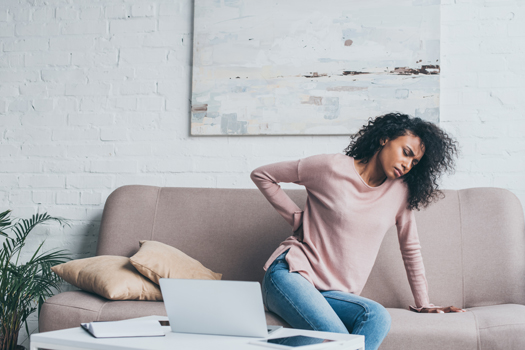 Most patients who undergo herniated disc treatment involving surgery don’t experience a reherniation of the same disc, but it does happen. According to the University of Maryland Medical Center, there's a 10 to 15 percent chance, on average, the same disc may be herniated twice. And this statistic is deceiving—patients with a large hole left in their disc after surgery are at several times the risk—and women under 50 may have up to 10 times the average risk of reherniation. Here's what you need to know about the possibility of this happening along with some tips on how to prevent it.

Why the Same Disc May Be Herniated Twice

As mentioned above, it's not uncommon for the same disc to be herniated twice, especially after surgery to remove part or all of a damaged spinal disc (referred to as a discectomy). As for why it could happen, there are a few main possibilities. One reason is that not enough disc material was removed if the entire disc wasn't completely taken out. It's also possible the remaining disc material shifted over time and irritated another nearby nerve.

The same spinal disc can possibly herniate again at any time after surgery. It's important to remember any soreness or stiffness you might feel within the first few weeks after surgery is usually considered normal. Reherniation is more likely to occur beyond the typical healing and discectomy recovery period. You could even notice symptoms suggesting the same disc has herniated again a year or so after your initial surgery. However, a lot of reherniations do occur within 90 days after discectomy surgery, due to patients being up and moving around again.

Signs a Disc May Be Herniated Again

If the same disc does become herniated again, you may start to notice a recurrence of the same symptoms you had prior to surgery. These may include:

• Pain within the area of the affected disc
• Numbness and/or tingling sensations
• Discomfort that radiates to nearby areas (e.g., thighs, hips, buttocks, and legs if a lower spine disc is affected)
• Symptoms triggered by certain movements

Reducing Your Risk of Herniating the Same Disc Twice

The first step you can take to reduce your risk of herniating the same disc twice is to follow the instructions provided by your doctor or surgeon. Also, be cautious with how you return to your preferred level of activity. Even if you're feeling fine, err on the side of caution and get the green light from your doctor or physical therapist first. You may also be able to prevent the herniation of the same spinal disc by making some healthy and beneficial lifestyle adjustments post-surgery. The ones often recommended include:

• Following a diet that includes nutrient-rich foods
• Achieving and maintaining a healthy weight
• Exercising regularly in a way that's safe and comfortable for you
• Improving your posture
• Using appropriate back support devices, like a lumbar support belt, if you'll be getting back to an occupation that involves lifting and similar movements

Check with your doctor first if you're noticing signs this may be the case. Typically, you'll be asked to describe your symptoms and have a physical examination. Image tests may also be done to determine if the problem stems from the same disc. Even if you do have a reherniation of the same disc, you may benefit from conservative treatments. If these aren't effective, a second surgery may be recommended.

One of the main concerns with surgery is the significant risk of reherniation—where the same disc herniates again through a hole left after surgery. In fact, 70 percent of all reherniations come from large holes left behind in the disc. Fortunately, Barricaid is a bone-anchored barrier designed to close these holes, and it’s proven 95 percent effective. This treatment is done immediately following the discectomy—during the same operation—and doesn’t require any additional incisions or time in the hospital.