What to Expect if You Reherniate after Having Surgery 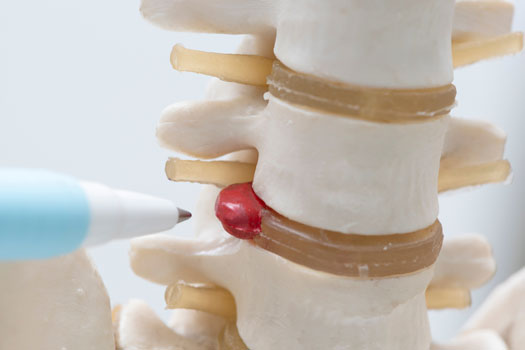 Roughly 10 percent of patients, according to Spine Health , experience another herniation affecting the same location after having spinal disc surgery. The risk of reherniation increases if you’re a younger patient with healthier discs. If you experience what's considered a reherniation, it could occur several months or longer after your initial surgery. Reherniations typically produce similar symptoms as the original herniations, such as sciatic pain or difficulty sitting or walking. Today, we take a look at what typically happens if it's confirmed you've likely reherniated a disc after surgery.

If pain and/or weakness return and reherniation is suspected, your doctor will conduct a physical exam that includes a discussion of your symptoms and diagnostic testing. This typically involves X-rays, MRIs, or other image diagnostics. The goal with these tests is to look for evidence showing or suggesting remaining disc material is irritating a nearby nerve, such as the sciatic nerve. Specialized tests, such as nerve conduction studies, may also be done to determine which nerve is affected to see if there's a correlation with the area where surgery initially took place.

Because of the potential to have a "false positive" in terms of the nature and source of your post-surgery symptoms, there's a higher bar for second surgeries. In other words, surgery isn’t likely to be the first option if a reherniation is suspected or likely. This is why patients are typically encouraged to follow conservative treatments first. As long as any discomfort related to a reherniation isn't severe or debilitating, you'll likely be advised to consider nonsurgical remedies that include:

You may also be advised to consider therapeutic injections. These are injections of a steroid medication mixed with a local anesthetic injected into the affected area. The purpose of these injections are to minimize pain so you can benefit more from physical therapy. Lifestyle improvements involving posture, diet, and exercise may be encouraged as well.

How your daily life is affected is one of the more personal considerations with disc reherniation. The nature of any related discomfort is subjective based on what you're experiencing and physical demands. Try to be as descriptive as possible when talking about how your quality of life is impacted. Other personal factors often considered include:

A Second Surgery May Be Recommended at Some Point

If your symptoms related to disc reherniation after surgery aren't manageable with nonsurgical treatments, surgery may be discussed and potentially recommended. For some patients, a second surgery simply means removing a little more of the protruding disc material. This may be enough to eliminate or noticeably ease your symptoms. If removing more disc material affects spinal stability, fusion may be needed to keep the spine stable.

Although discectomy surgery is generally a very successful procedure, a hole is left in the outer wall of the disc. Patients with a large hole in the outer ring of the disc are more than twice as likely to reherniate after surgery. A new treatment, Barricaid, which is a bone-anchored device proven to reduce the likelihood of a reherniation, was specifically designed to close the large hole often left in the spinal disc after microdiscectomy. In a large-scale study, 95 percent of Barricaid patients didn’t undergo a reoperation due to reherniation in the 2-year study timeframe. This treatment is done immediately following the discectomy—during the same operation—and doesn’t require any additional incisions or time in the hospital.