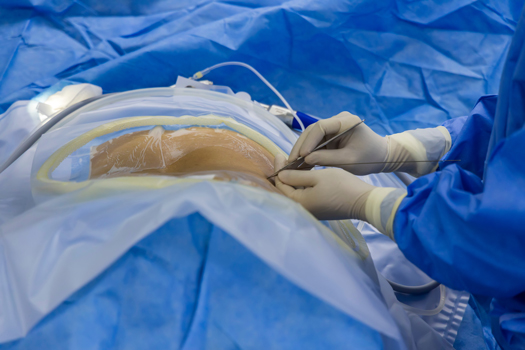 A discectomy is a common procedure performed to address pain and nerve-based discomfort stemming from a herniated disc. Discectomies are more likely to be performed with minimally invasive techniques (this is especially true with microdiscectomies), and this often means only removing as much of the disc as necessary. However, there may be times when the entire disc is removed. This article explains more about disc removal during a discectomy.

Why Minimal Disc Removal Is Preferred

The goal with spine surgery in general is to avoid significant disruption to the various structures within and around the affected area. With a discectomy, this applies to the spinal disc contributing to the symptoms. When possible, spine surgeons often prefer to remove only the part of the disc affecting a nearby nerve, which benefits patients by:

When Entire Disc Removal Is a Possibility

Doing what is best for the patient is the main goal with a discectomy or any other spine-related procedure. In some situations, this may mean removing the entire disc instead of only the protruding portion. It is more likely for full disc removal to be recommended or considered necessary if the following circumstances apply:

If only part of the disc is removed, a discectomy is a standalone procedure. In addition to the benefits already mentioned, partial disc removal does include some potential risks. The main risk is the possibility of reherniation. However, if another herniation does occur, there are ways to effectively manage related discomfort without a second surgery.

With full removal of the disc, a second procedure needs to be performed at the same time to keep the spine stable. The most common spine surgery paired with a discectomy is spinal fusion surgery. Specifically, fusion involves using bone graft material to "fuse" or join spinal bones on each side of the space left behind by the disc. While this does restore backbone stability, range of motion in the affected area is often limited to some extent.

Determining What Is Best for Your Situation

The first step to take before a discectomy is recommended is to get an accurate diagnosis. This is when image tests are often performed to determine the nature and extent of the damage to the disc responsible for your symptoms. The main determining factor for how a discectomy is performing is the disc-related symptoms. Additionally, this decision is also typically based on:

Whether a patient has a traditional discectomy, a less invasive microdiscectomy, or spinal fusion surgery, recovery time, pain levels, and other post-surgery issues vary among individuals. An additional factor affecting outcomes is a large hole in the outer ring of the disc after surgery. If the hole in the disc is larger than a standard pencil eraser, the patient has a significant risk of experiencing a reherniation. Patients with a large hole in the outer ring of the disc are more than twice as likely to reherniate after surgery. These reherniations often require additional surgery or even a larger spinal fusion operation. Barricaid is a bone-anchored device shown to reduce reherniations by closing the hole in the disc after a discectomy, and 95 percent of Barricaid patients did not undergo a reoperation due to reherniation in a 2-year study timeframe. This treatment is done immediately following the discectomy—during the same operation—and does not require any additional incisions or time in the hospital.